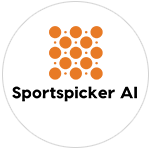 THE ONLY HANDICAPPING SERVICE POWERED BY A.I.

Praised by ESPN, Sports Illustrated, and Forbes for its accuracy, Sportspicker A.I. combines the power of A.I. algorithms with the collective intelligence of crowds, enabling us to consistently beat bookmakers across a wide range of sports. Unlike most handicappers who rely on gut feel, Sportspicker A.I. uses A.I. technology, rigorously validated by two dozen academic studies, including Stanford and MIT.

Who is Sportspicker AI

Sportspicker AI was developed by UNANIMOUS AI, a leading pioneer in Swarm AI® technology, a unique form of AI that amplifies human intelligence to make better forecasts and predictions for Fortune 500 companies. In 2016, a reporter at CBS Interactive challenged Unanimous AI to predict the 2016 Kentucky Derby. Using Swarm AI, we nailed the superfecta (first four horses in order), turning a $20 bet into $11,000!

What sports do they bet on?

Sportspicker AI will have plays on NHL, NBA, MLB, Soccer, and Esports.

What are their handicapping systems/methods?

Sportspicker AI uses Swarm AI technology to harness the knowledge, wisdom, insights, and intuition of real people (sports fans) in real-time, generating forecasts that have been shown to outperform other methods.

Rooted in the biological principle of Swarm Intelligence, our award-winning process connects networked groups of human forecasters into “Swarms” that think together as a system, creating an AI-powered “Super Intelligence” that outperforms.

What is their strategy for pick rating and bankroll management?

Sportspicker AI’s picks generally fall between a 5* to 8* rating depending on strength. They advocate keeping your wager size smaller and consistent to maintain a long-term profit approach.

Sportspicker AI typically has 2-4 plays per day, released late afternoon ET the day of the game.

Get access to ALL of Sportspicker A.I.'s NBA + NCAAB picks for 31 days.

Get access to ALL of Sportspicker A.I.'s NBA + NCAAB picks for 31 days.