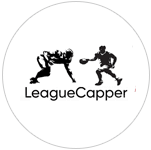 Former Forum Legend, LeagueCapper, is back with his own service here at Covers Experts.

Documented as the best performing NFL + NBA handicapper in the Covers Forum history, his 2021/22 NFL campaign got off to a white hot 6-0 start!

Who is LeagueCapper?
LeagueCapper is an adaptable situational player who values motivation, fatigue, injuries, and perception above everything else and understands that throughout a long and tiring season - teams have a difficult time getting up and giving 100% effort in each game. Finding these situational spots where a team might put forth less effort has been something LC has specialized in and has resulted in him crushing the books over the past 10 years.

What sports does he bet on?
Never been one to stray into new sports, LC has stuck to NFL and NBA perfecting his systems and adding and growing new betting angles every passing season.

What are his handicapping systems/methods?
LeagueCapper begins his handicapping each week by editing his patented undervalued/overvalued list of teams he believes are flying under the radar, or those who appear to be better than they really are. From there - LC adds situational angles, motivation, and injuries into play and finds what he beleives is the strongest side to bet.

What is his strategy for pick rating and bankroll management?
LeagueCapper's highest rated plays will be posted as a 10* and scale down from there.

What should I expect for pick volume and release time?
5-8 plays per weekend in the NFL, to be posted during the day on Saturday. NBA picks to be posted a few hours before gametime.

Get access to ALL of League Capper's NFL Playoffs picks including the Super Bowl.
Product has been purchased.
$199
$199
$199 Analysis for all 32 teams heading into the Season.   Read More
All Experts News

Get access to ALL of League Capper's NFL Playoffs picks including the Super Bowl.
Product has been purchased.
$199
$199
$199

Get access to ALL of League Capper's NBA picks for 31 days.
Product has been purchased.
$199
$199
$199
About Us
Contact Us
Careers
Our Team
Brand
Testimonials